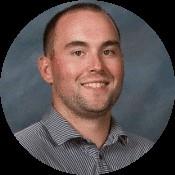 Mr. Hurley is a 2009 graduate from Sioux Falls Lincoln High School in Sioux Falls, South Dakota.  During his time at Sioux Falls Lincoln High School, Mr. Hurley played football, basketball, and baseball. After high school, Mr. Hurley attended Blinn College for 2 years, then transferred to The University of South Dakota in Vermillion, SD where he earned a degree in Criminal Justice with a minor in Political Science. After earning his degree at USD, he attended The University of Northern Colorado in Greeley, Colorado, where he earned his Master’s in Education in 2015. After college, Mr. Hurley taught 4 years of 5th grade & 2 years of 7th grade at Tea Area School District. Mr. Hurley will begin his first year in Parker as the 10-12 ELA Teacher, and will be the Head Boys Basketball Coach.

Mr. Hurley lives in Harrisburg with his loving wife, Kaila, and his two daughters, Kollins (2) & Gentri (Newborn). His family enjoys attending sporting events, going to concerts, watching movies, reading, & going on walks. When Mr. Hurley is not teaching or coaching, you can find him at the golf course hitting golf balls on the driving range or playing 18 holes.